September seems another big expansion of the London Overground (LO) as it takes over stations on route to Croydon ahead of next years running of services on the East London Railway (ELR). The following stations will be taken over on the 20th September;

This will lead to a re branding of the stations ahead of the East London Rail services expected to start serving these stations in Spring next year. It remains to be seen if the first services using Oyster at these stations will be Southern's or London Overground's.

This comes along with the news that Imperial Wharf station is to open of the 27th of this month. The new station which has been in the planning stage for years is the second completely new station opened since TfL took control of the Overground network and also the second new station on the West London Line.
Posted by Mackenzie at 17:46 3 comments:

Slowly and surely the 377/5 are being delivered by Bombarider. Current First Capital Connect have now 12th units meaning we are now half way through the delivery programme and the current final unit, the 23rd is due mid november. 377506 made its passenger debut today, working along side 10 other Electrostars. So far the units have come into service as such 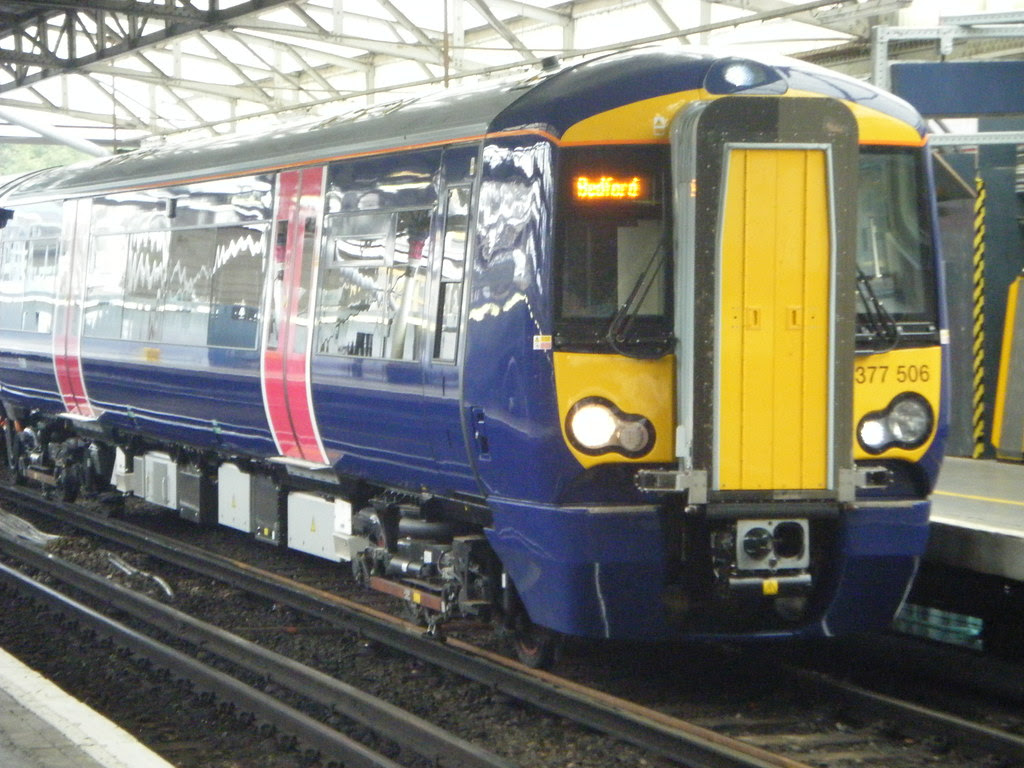 377506 on the return leg of its first jounery in passenger service. 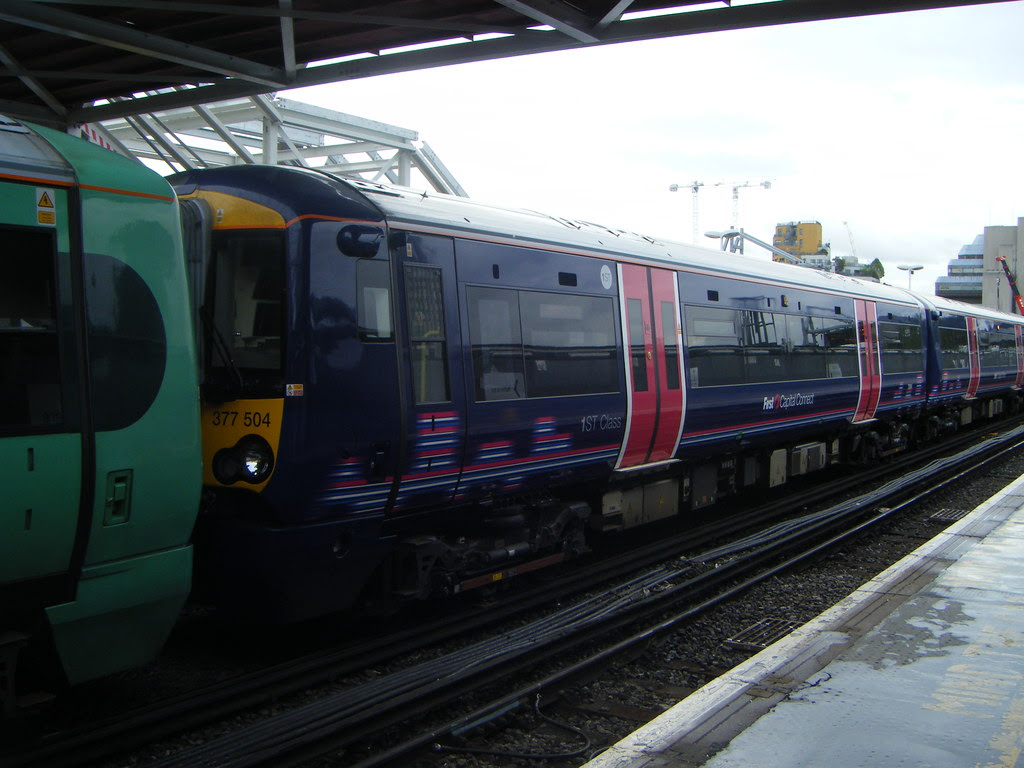 Currently units 377516 and 377520 are still on comissioning test and both due at FCC's Cauldwell depot by the first week of October. No moves from Bombardiers Derby workshop where the 377/5 are being built to Southern's Selhurst depot are booked at the moment meaning there will be a gap after 377520 is delivered, but units 377503/514/515/517/518/519/521/522/523 are still due to leave Derby. The quickest a 377/5 was comissioned was three weeks with unit 377505. During the testing, normally done at night, the units have been to many distant places that they won't visit for a few more years including Tonbridge, Milton Keynes and Littlehampton.
Posted by Mackenzie_blu at 22:09 No comments:

Just a quick update with some pictures of Blackfriars. Over the bank holiday wekend the passenger bridge linking platforms 4 and 5 was lifted into place. as you can see from the following pictures, work has progressed rather well. 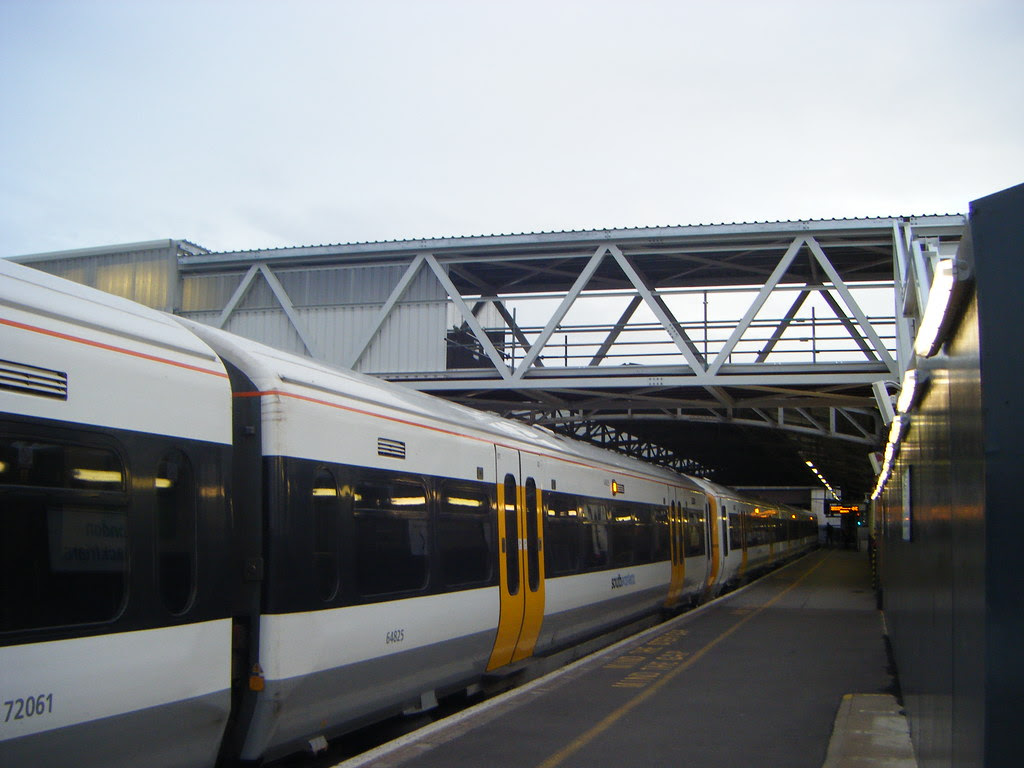 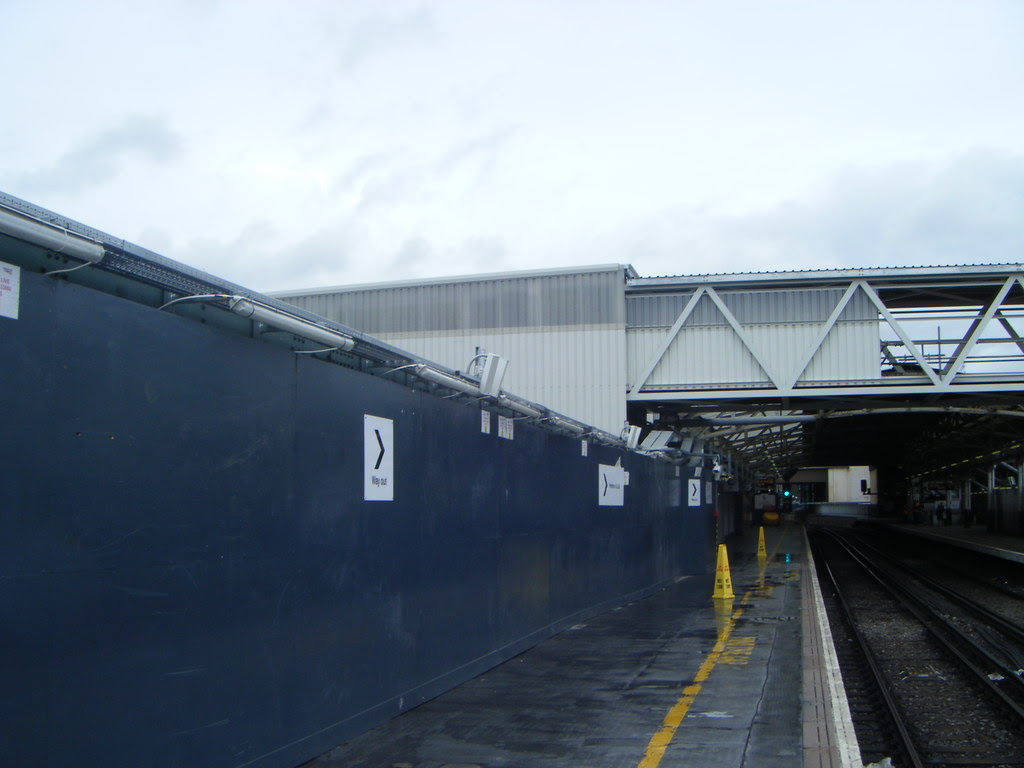 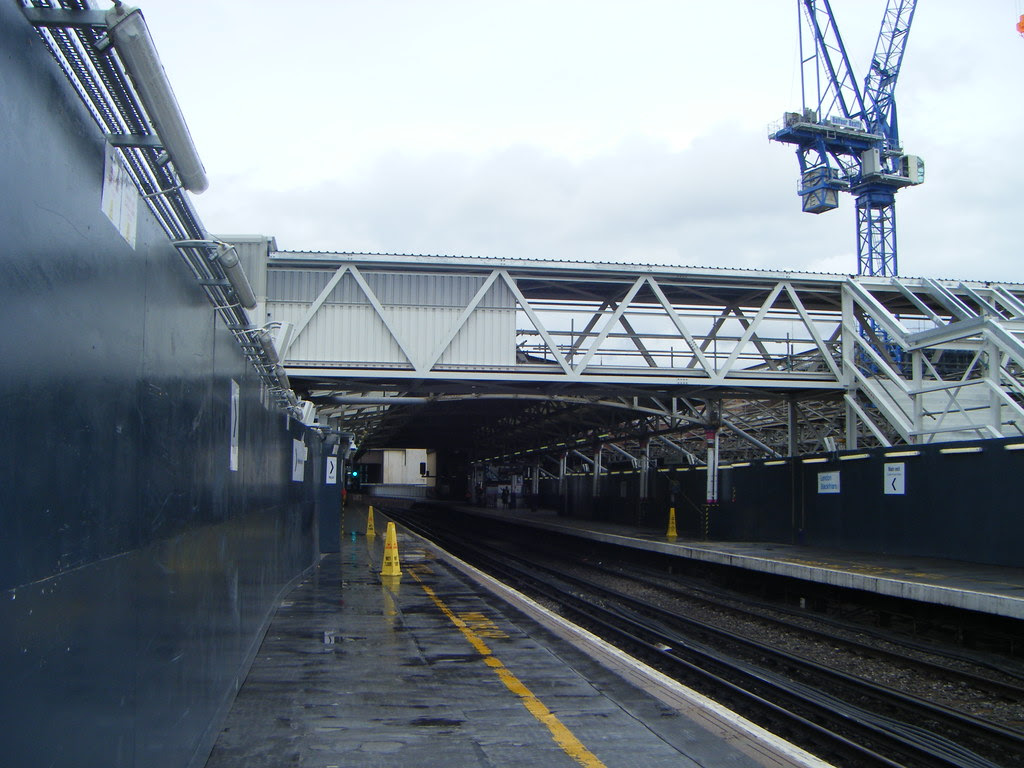 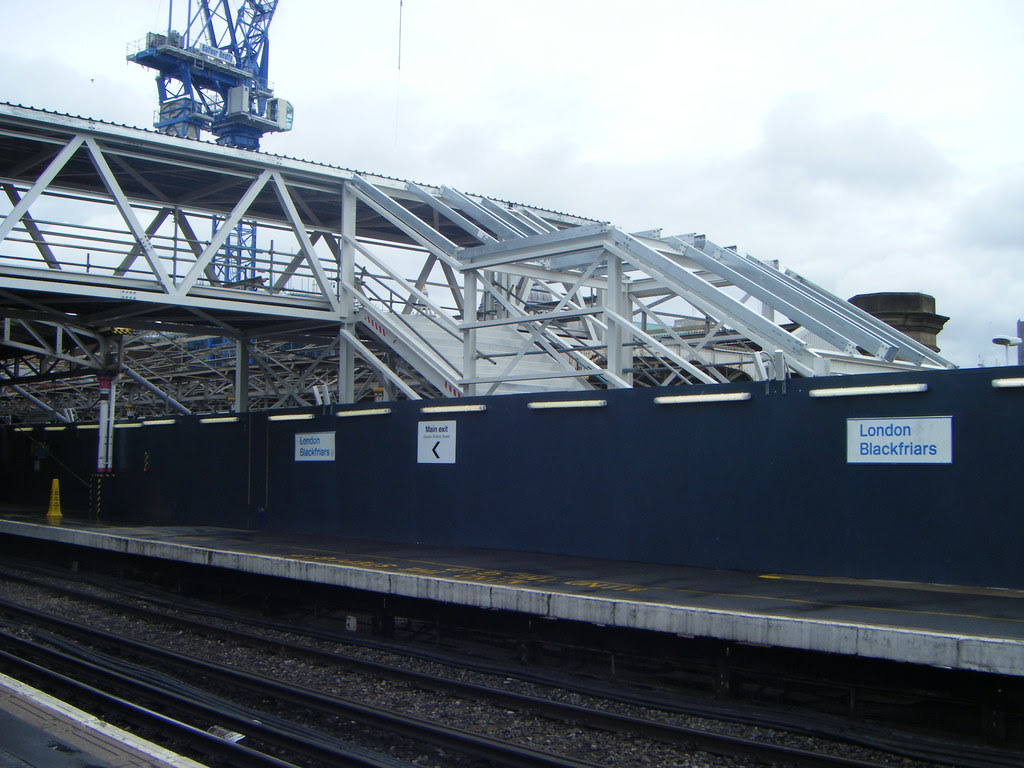 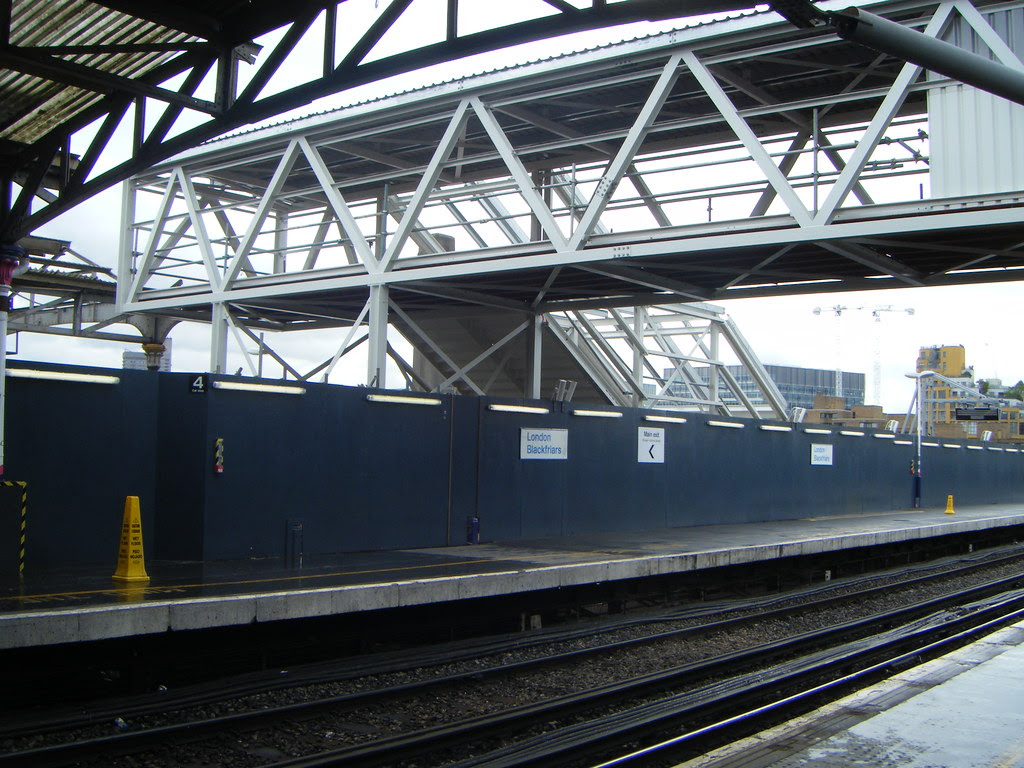 Not in the pictures is the new front entrance to the station which is completed. It will open along side the new station control room in around two weeks time.
Posted by Mackenzie_blu at 21:55 1 comment:

This weekend saw major changes being implemented on the northbound platform 5 at Blackfriars this weekend. As part of the on going works the platform is being extended to the south. This was necessary because of the closure of the link bridge over the District/Circle Line below to the main exit. This now means the main way onto the platform is from the newer St Paul's Walk. The subway between platform 5 and 4 is still open for the movement but will be closing soon once the new link bridge is complete (currently due for a months time). 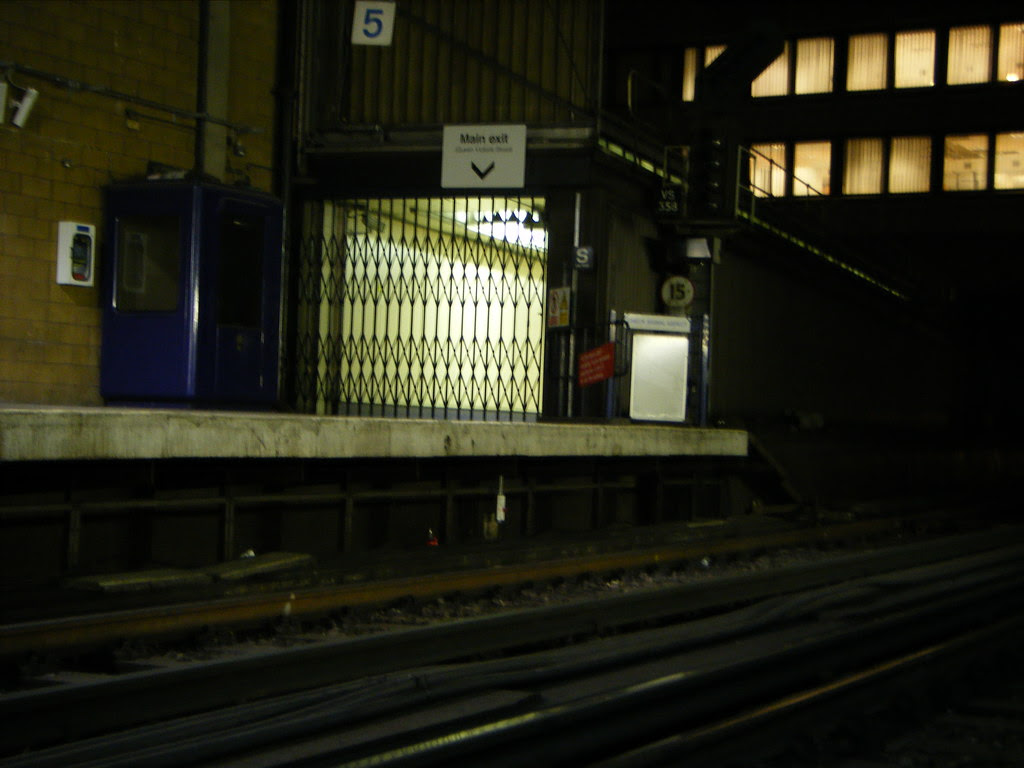 This is the link bridge not long after closing for the last time. This bridge actually spans the District and Circle Line below, now encased. 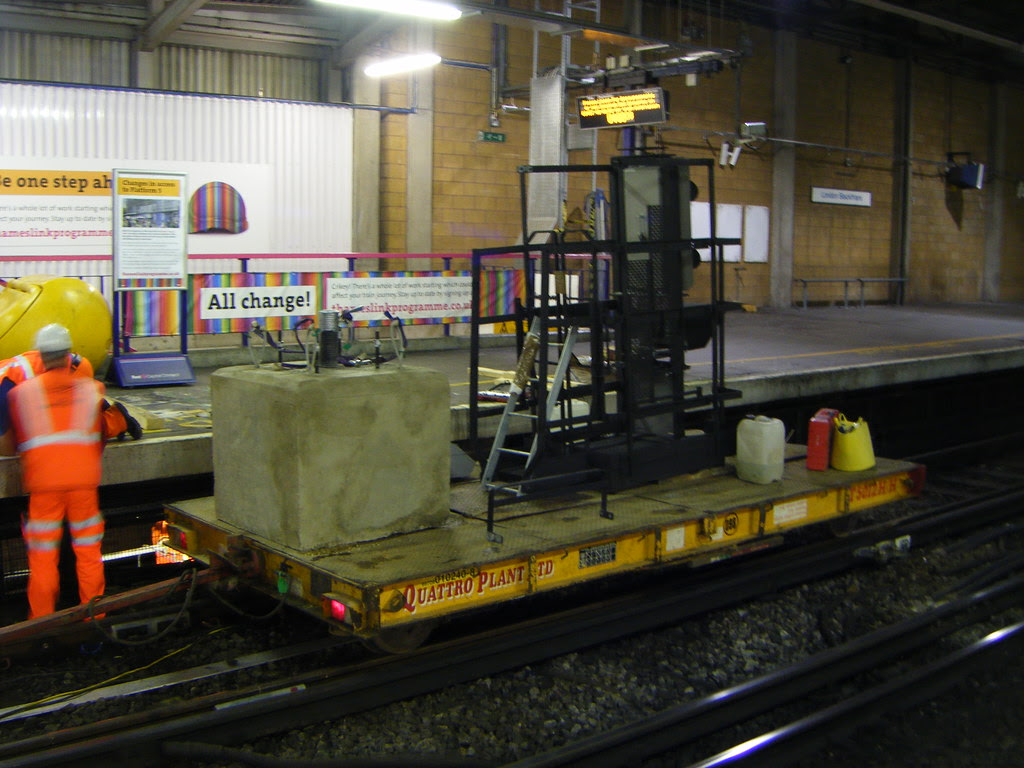 This is the signal waiting to be assembled


This massive block is lifted onto the platform onto some concrete to hold it steady. 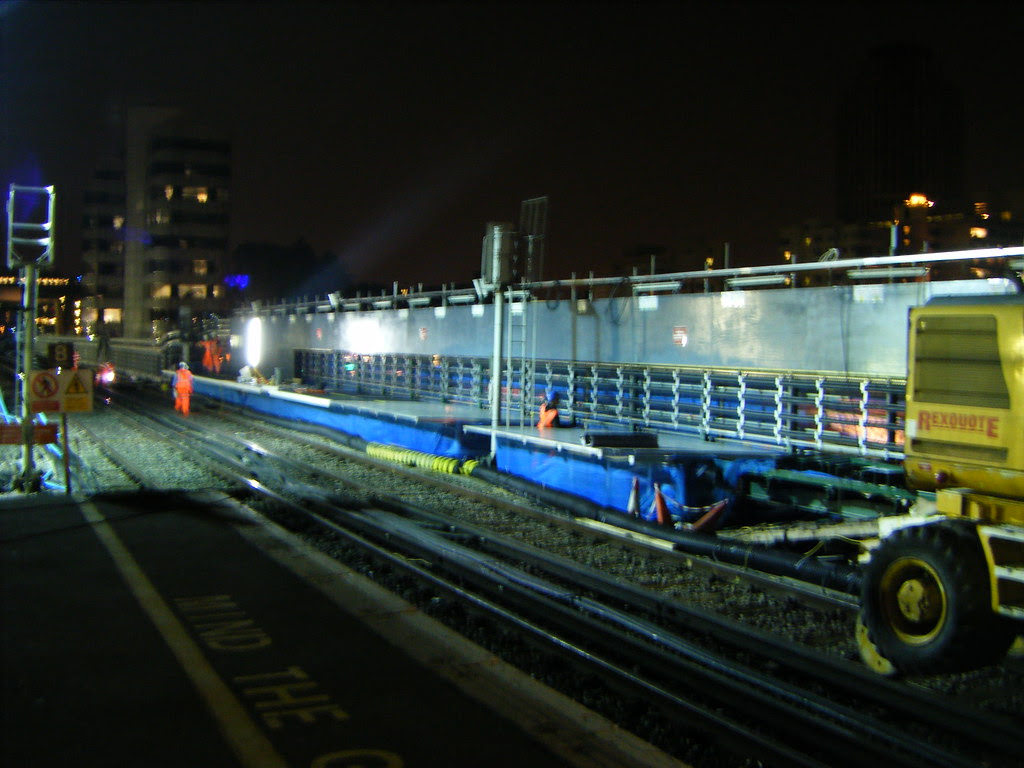 This is the platform extnesion on the south end of the platform 5.
Posted by Mackenzie_blu at 23:15 No comments:

Here's some new images of the new platform 4a at Stratford for the Central Line. The platform is being build as part of the upgrade of Stratford station to handle the Olympic crowds and the extra traffic as the station is now one of the biggest interchanges outside Zone 1 in London. 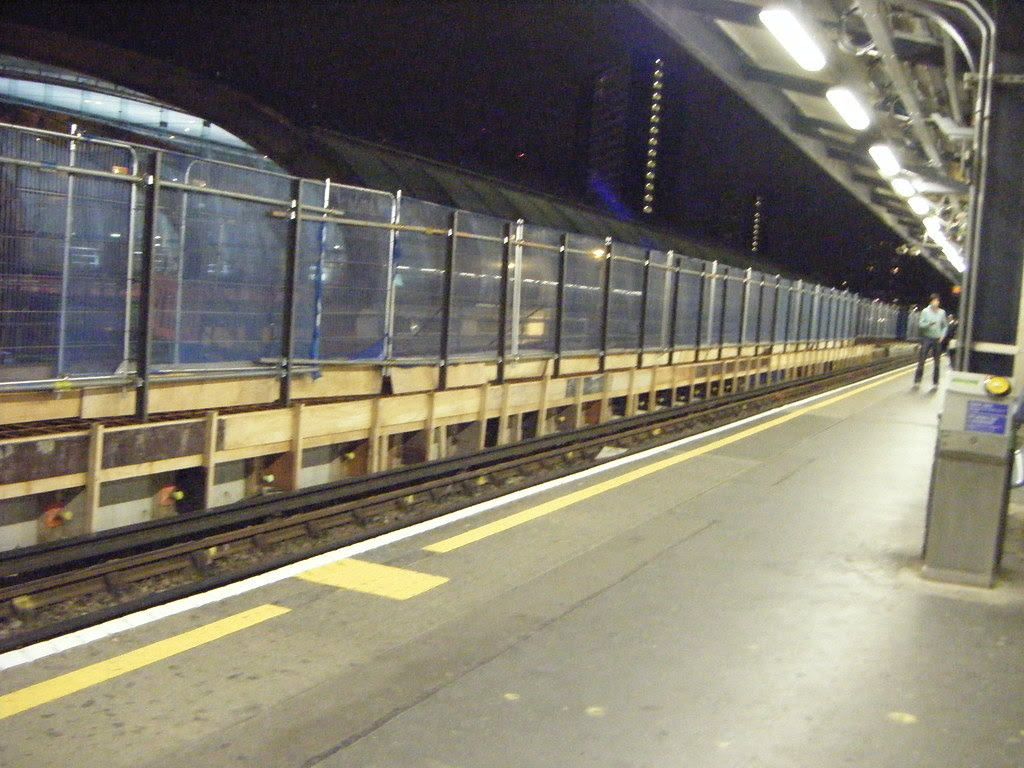 The Jubilee Line building is in the background here looking towards Canary Wharf. 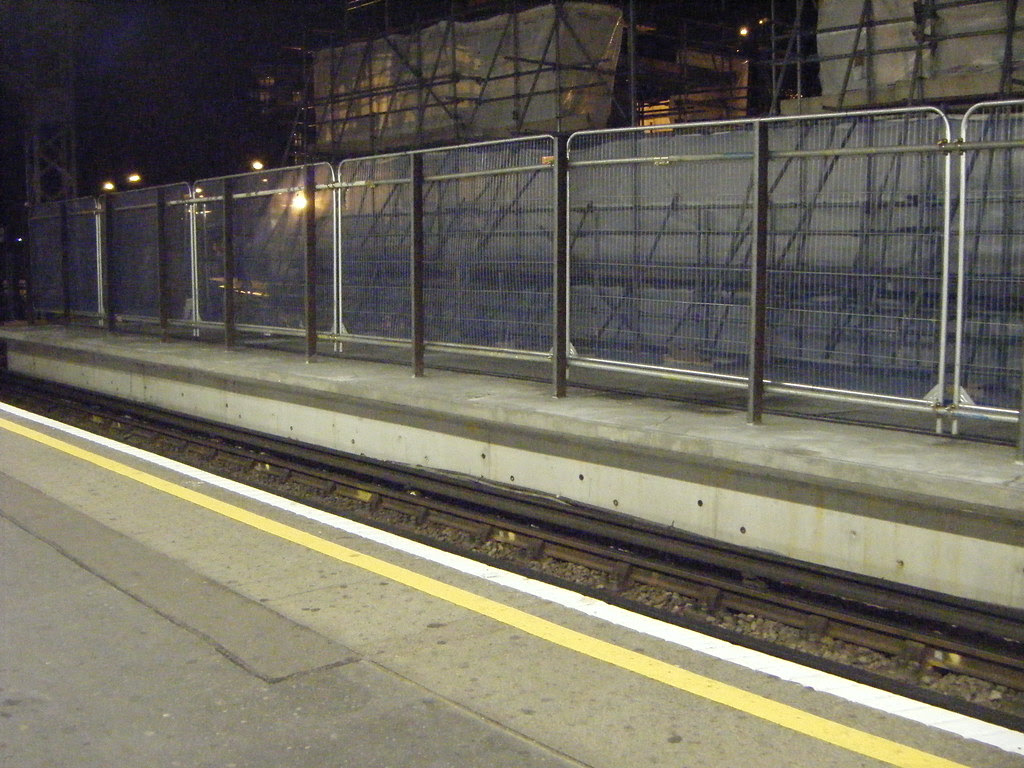 In the background here is the supports for the new bridge over the railway into Stratford City development and the Olympic Park. 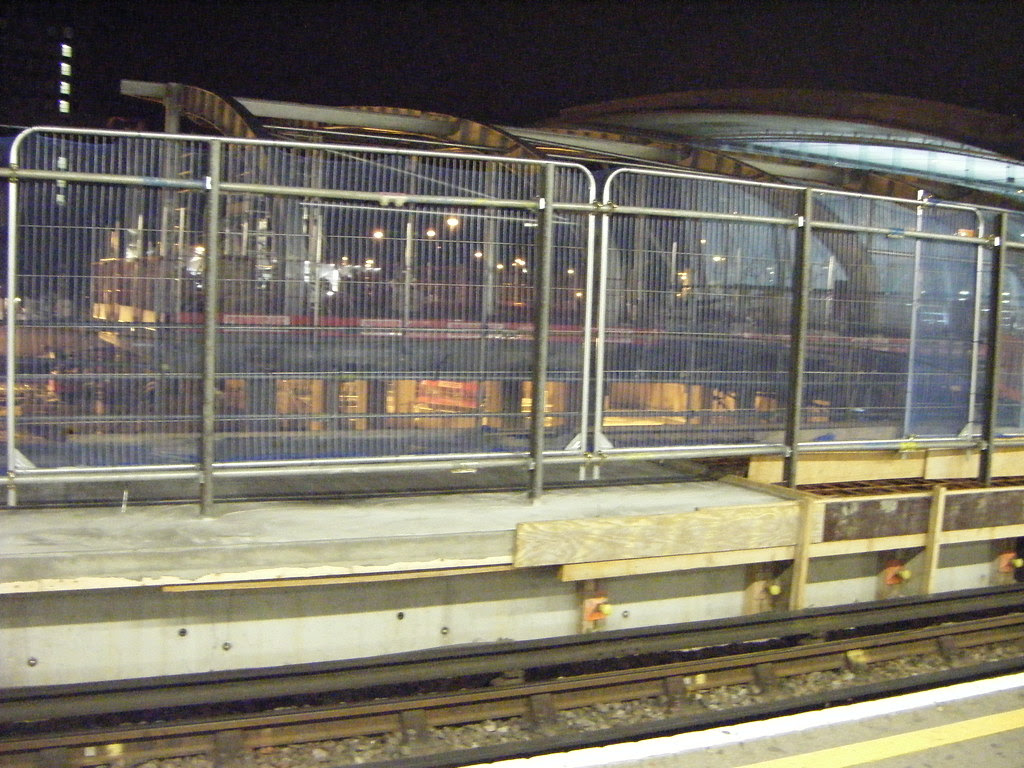 You can see in this image the new station extension building in the background to this shot.
Posted by Mackenzie_blu at 12:14 1 comment:

Seems the first 378 in passenger service will be tomorrow with the following services booked to be 378 trips;

This follows on from last weeks debut of the first of new Victoria Line trains (09TS). The usual terms apply as it may change last minute but hopefully the first 378 run for us passengers will happen and give the Overground's clearest sign of improvement yet.

First Capital Connect is still getting a slow trickle of new 377/5 units from Bombardier with its 7th unit, 377509, coming into service on Monday 27th July. The 8th unit, 377510, is due at Bedford tomorrow (29th July) in exchanged from Southern's 377206, One of five 377/2's that FCC are still borrowing. 377511 is nearly completed commissioning runs and will be delivered on Tuesday (4th August). The 11th unit will be 377506 and is expected to get to Selhurst on Friday (31st July). Once this unit comes into passenger service of Southern's borrowed 377/2 will have been returned and FCC can then look forward to lengthening service and delivering on the original promises of KO0.
Posted by Mackenzie at 22:44 3 comments:

As announced yesterday, the new 09TS (Tube Stock) trains for London Underground's Victoria Line made their first appearance late last night. The unit began its career on a 23:55 service from Seven Sisters to Brixton. This is likely to be a semi regular thing with three paths from next weeks timetable change so if your catching one of the last Victoria Line trains home keep an eye out for the unit.

Currently London Underground only have two of the 09TS units but only one (train 2) is equipped for passenger service. The first unit, train 1, is still half fitted with testing equipment. No further deliveries of 09TS are expected for the moment but a slow ramping up at Bombardier's Derby works is expected as the new fleet replaces the original Victoria Line trains dating from the 60's

The Victoria Line Upgrade or VLU is designed to give the Line its first real boost since it opened in stages from September 1968 to March 1969 with the Victoria to Brixton section opening in July 1971. The VLU will provide an 19% increase in capacity and 16% reduction in traveling times. This is achieve in part by faster running and extra space on the new fleet taking advantage of the slightly larger tunnels on the Victoria Line than other Tube lines. In peak currently LU runs 27tph (Trains Per Hour) on the Line and this will increase to 33tph once the upgrade is complete. A new signaling system is also being installed with the current one removed once all the current 67TS trains are withdrawn from service.

The VLU is supposed to be finished in early 2012 but all the overruns (including the fact the first new 09TS train is 8 months late going into passenger service) it is now the target to complete the upgrade just before the Olympics so the Line can handle the increase in traffic.

Click here for images of the first passenger run from Bowroaduk.
Posted by Mackenzie at 18:46 No comments:

After months and months of delays it looks like two new Bombardier trains will be coming into service this week.

As previous posted, the delayed 378 introduction is some seven months late. After last weeks official press launch and the selling of commissioned units to the new ROSCO, they can at last be put into service.

Also of note is the first 09 Tube Stock (09TS)for the Victoria Line has been penciled in for a passenger run as early as today (Tuesday) in the off peak hours. These Bombardier trains, based on the Electrostar platform, are even more late than the 378s. The first one in passenger service was due in November, some 8 months late.

Hopefully at least one of these two will come into service and finally help deliver TfL promise of better transport. Both fleets are designed to tackle overcrowding on their respective lines by having more space, running quicker and in the case of the 378, be longer to accommodate growth.
Posted by Mackenzie at 11:11 5 comments:

Today National Express announced that they stop providing financial support to there lost making East Coast arm triggering the Government to remove the franchise from their control and for the year, run as a publicly owned company. This follows on from my previous story here.

National Express also runs two other franchises in NX East Anglia & c2c. East Anglia runs all the services out of Liverpool Street and c2c is an successful operation from Fenchurch Street to South Essex. Both are heavy commuter routes into London in the peak

More worrying signs that the DfT were prepared to strip National Express of all its franchises as in the words of Secretary of State for Transport, Lord Adonis “The Government believes it may have grounds to terminate these franchises, and we are exploring all options in the light of the Group’s statement this morning.”

In the statement he also added “A company which had defaulted in the way National Express now intends would not have pre-qualifed for any previous franchises let by the Department. I note that the parent groups of previous franchise failures are no longer in the UK rail business. It is simply unacceptable to reap the benefits of contracts when times are good, only to walk away from them when times become more challenging. “

On their website tonight is a paragraph in the trading statement not updated for todays events but clearly showing that National Express has walked away from East Coast but not the rail industry, “In the event that the Secretary of State for Transport ('Secretary of State') reassumes control of the franchise, National Express would work with the DfT to ensure an orderly handover and ensure that passengers, services and employees are unaffected. The Group does not expect that such circumstances would result in cross default of the Group's other rail franchises.”

If the DfT decides to try and strip National Express of all its franchises, then there will be a fight. In the case of c2c, it may be better to leave the franchise as it is and allow it to develop an improve an already good service. As for East Anglia, NX have recently order 30 class 379 Electrostars and 17 class 321 EMU to increase train length and cope with passenger demand.

Posted by Mackenzie at 16:11 No comments:

Just a small update, an 378 unit reached Watford Junction in daylight hours and the units ramp up again in driver training following the recent problems with the Electrostar fleets.

Hopefully in the autum this will be a much more common sight.

Thanks to my friend Steve at Watford for the shot.
Posted by Mackenzie at 12:24 No comments: